day 14 - becoming friends with the wind

By 9:00 Eduardo was not there. I had packed my backpack but waited to break up my tent as it was my only shelter. The weather forecast for today wasn’t that good: winds between 80 and 100 km/hr. I went to the toilet spot – a stone wall up the ridge with an amazing view to the mountains in the east, but left it even before I sat down, as it was so windy and cold that my butt got frozen off in seconds and I risked being blown off the mountain.

I walked up to the orange-white dome tent not far from my tent, and got invited for tea. Inside it was quiet, there was a serene atmosphere, and I could hardly imagine that at the same time, forceful winds outside were trying to blow my tent off camp 1.

The expedition leader was melting snow in big pots – today the group would not move. She was a local, and had climbed Aconcagua before. We chatted for a while and connected on the common goal we had: we all wanted to summit.

Then she said: 'But in the end, it's the mountain who decides.'  I was impressed by the respect she showed for Aconcagua and realized that despite all efforts we put into something to reach our goal, there are elements we cannot control.

Going up in brutal storm

By 10:30 I crawled out of the dome to see if Eduardo had arrived, and found him at my tent. The force of the wind was unimaginable and we quickly disappeared in my tent to protect ourselves. We could see a snowstorm coming in from the col as grey clouds packed together.

‘Eduardo, should we go up in this extreme weather today?’ I asked him. He said: ‘Renate, if you want to go to the summit on the 11th (the best weather-forecast day), we have no choice.’ Half an hour later we were on our way up. I had roped up with Eduardo as there was a serious risk to be blown off the steep trail, something that happened a few times when I could just hold myself standing. I fought with the elements and could hardly keep myself standing upright. In fact, it was insane to go up in this weather and the winds only got stronger as we got higher.

Becoming friends with the wind

At the col, the wind had reached its ultimate force. Exhausted we sat or better said, laid down, for a moment. A porter was trying to make his way up, and he let himself fall down next to me. I grabbed my water bottle and at the moment I took it out of my backpack, the wind stole the parka that insulated the bottle and there it went, up in the air.

As frantically I normally am with waste in the mountains – I always come back home with pockets full of rubbish collected here and there – this time I just watched the parka flying through the air. I did not say anything.

Nobody said anything, talking in this storm was pointless anyway. We just stared at the piece of fabric being swept away, until it disappeared into the thin air. As we continued, I tried to become friends with the wind, telling myself that the wind blew away all the lifeless things I had kept inside for a long time, that he was not an enemy but a friend.

On the col we took a new route and headed to camp 2 of the old Guanacos route (in fact it is camp 3 but in basecamp everybody spoke of camp 2 as it is the second camp on this route after camp 1).

The route gently winded down. Visibility had decreased to almost zero and it had started snowing. At a big boulder on a large open area we took a break. My legs did not want to move anymore. I wanted to believe that camp 2 was here – this was such a good place for a camp! – and got very disappointed when I saw the long white route going up into the void.

We were not there yet. Not at all. I gathered all my willpower and continued with Eduardo the steep trail with the deep ravine on the right side. The porter had continued and we followed his footprints, but they were quickly wiped out by the falling snow. Suddenly we found ourselves in a white out. We stood on a snowslope and could not see anything, it was just white and grey around us. We had no idea where to go. Neither of us had a GPS, nor a detailed map.

This was the point where the adventure started for Eduardo, who had proven himself to be very skilled at finding safe routes up and down the mountain, but now found himself in a situation beyond his control. We stood there thinking what to do. My altitude meter showed 5435m. Thinking that this was our only point of reference I suggested that we continued walking while staying at this altitude.

Slowly we started moving again, into the white. Eduardo then saw a thin line, possibly old footprints. I looked to see it, but I could not find any line. But I had complete trust in his intuition and after moving further into the unknown, we reached a rocky section where the snowy trail continued for a long time and finally led us to camp 2.

When we reached camp 2 by the end of the afternoon, I was exhausted, cold and wet. It snowed heavily and I was surprised to find 20-30 tents in the snow - many people had spent the last few days here, as the weather was too bad to go up. I did not see anybody, they were all in their tents, except for Max and one of the other guides from the Mexican group who walked up to us as soon as they noticed us. They took us to a big mess tent. There was so much snow that the door opening was low and I literally had to crawl in. Inside the tent, it was warm. Several stoves were burning, the guides were melting huge bags of snow. They gave us tea and hot chocolate and we chatted for a while. Being cozily together in the misery creates a bond. Then it was time to pitch our tent. I had become very efficient in pitching my tent, but the extreme wind made it impossible to do this together and Eduardo and I were struggling. Three others came to help us and with the five of us, we were finally able to pitch the tent and fix the guy lines.

My feet were cold and my first goal was getting warm. So I kept myself busy filling a bag of snow that had piled up in the awning and melting chunks of snow on my stove that now seemed to work at only half its capacity. Now Eduardo and I shared the tent, which meant that our backpacks had to move to the awning where they quickly disappeared under a layer of snow. In the tent, there was snow everywhere. We had an instant soup and chicken sweet and sour for dinner and it tasted really good, even for a vegetarian…

Simple things are not so simple anymore

After dinner I had to go outside to pee, which was quite an undertaking in this weather. I put my feet in my snowy shoes and put on my frozen snow goggles. As quickly as I could I went outside just a few meters away from the tent. 5 Layers down, 5 layers up seemed to take forever and peeing in this freezing cold was such a pain. On the way back I checked the guy lines of the tent. I felt a bit anxious, I just hoped that the tent would stay strong through the night. 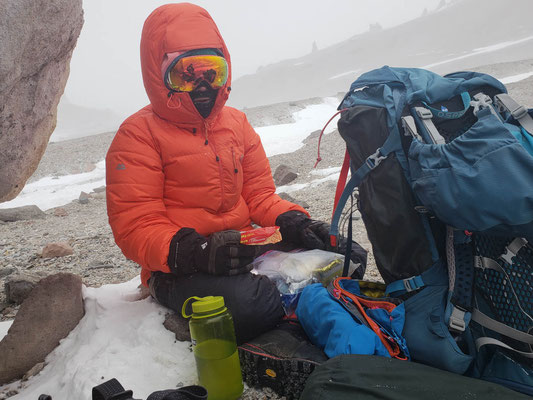 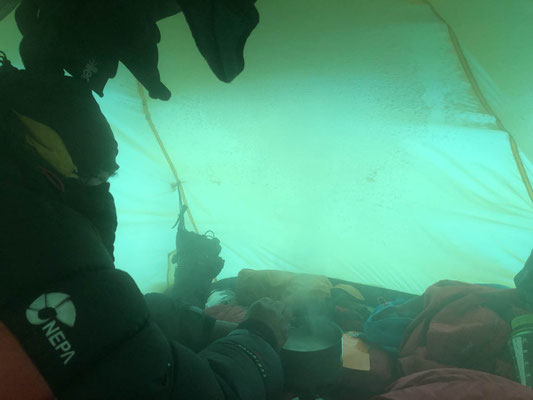 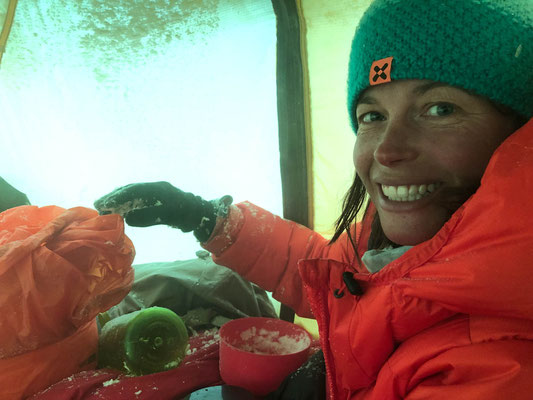